i fell for you knowing
i would have to let you go
knowing some things,
like duty, and loyalty, and service
require sacrifice, even when that
giving is each other.
i knew all along that the
vows we have made to serve and protect
are as sacred
as the vows we have made to each other.
and everyone talks about sacrifice
like they know what it is
meanwhile i miss
the scent of your skin on the pillow
fingertips brushing my lips
your hands encircling mine
many waters cannot quench love
neither can flames overtake it
it does not drown in the ocean
and miles and miles do not
tear it apart
all this i know, and
i still believe the greatest gift we
can give to community and country
is ourselves,
but even so,

i cannot wait to see you again. 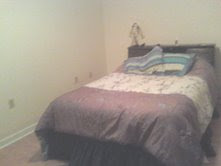 Here are after pictures of what can be accomplished on a day off from work. 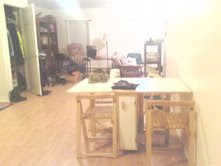 The living room and bookshelves still need to be done, but that will happen tomorrow, and everything will be sorted through. But my biggest achievement of the day is picking up the two new additions to our tiny family. 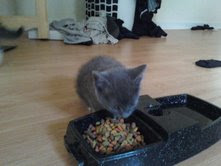 Today was my day off.
I went into work at 1700 anyway. Not that I minded; I offered to pick up some of my sister's hours so she could go home and spend time with her husband and baby. My husband was playing softball, so I figured I could address wedding invitations up while at work as well as I could do it at the house.

This week I work Sunday, Tuesday, Wednesday, Thursday, Friday, and Saturday.
It is very lonely sometimes. My husband puts in more hours than I do between work and school, but our schedules are often opposite. It's an occasion in this house when we actually get to spend a night together. I have been trying to see Night at The Museum 2 for three weeks now, but every time I try to make plans with either Rob or someone else, I wind up at work. Rob keeps telling me I can say no, but I can't. We need the money. The wedding is I-won't-tell-you-how-much over budget, but it's a lot. And my car failed inspection, with a six hundred dollar price tag to fix it. On the way home today, something burned up in it. Rob says we're not going to bother fixing it; we'll just buy a truck. And that means spending more money.
And that means I need to work 70 hours.

I'm tired. Medical bills have piled up. Things that should have been covered by insurance have been denied, and trying to find the time to deal with that is impossible. I forgot to pay my two credit cards last month(time just goes so quickly), and now they keep calling me. I'll pay them Thursday, but for now I just ignore the phone calls. And a wedding. And a new car. Fortunately, we both have decent jobs. Two incomes goes a long way, and everything gets paid.

But I am still lonely. Work has invaded every part of my life, I think sometimes. I keep saying I should take up hobbies, but it's hard to find something that interests me. Rob keeps telling me to write down a list of things I would like to do, but all I come back to is work.

I think work is an addiction for me. And I think more sleep would be beneficial...but not this week, or month, or summer.
And the cycle begins again.

Nobody ever told me that getting married was such a ridiculous amount of work. I thought I had cut down on the work by:
a) getting married privately beforehand
b) not having attendants, and

c) having a wedding planner/consultant/whatever they are do everything.
No, I still have to figure out favors and wedding programs(at this point, I will pay whatever price necessary to not have to do them myself) and then review and finalize the wedding guest list, then print, address, and mail invitations. Good God. Apparently people who get married don't have jobs and a house and a kitten coming in the weeks leading up to the wedding.

On top of all this, I have been on SoluMedrol and Prednisone almost non stop the last few months, and this has resulted in a very stubborn 10 pound weight gain since Rob and I were married. I am dreading trying on my wedding dress, because I have a strong suspicion it's not going to fit. Then, guess what, if Mom can't alter it, I get to go buy another wedding dress to fit my ridiculous 5'4", 140-pound frame.
So I am trying to google wedding favors. Someone had suggested making CDs and giving them out; but that has started to seem like more time and energy than I have. I am thinking of buying and printing monogrammed labels for candy bars and giving them away. Chocolate can never be a bad thing, and it seems like something fairly easy to do. However, most monograms seem to be the couples' last name initial in large letters with their names on either side. Since Rob and I don't have the same last name, I can't figure out how to develop a monogram.
As far as wedding programs, I like the idea of fans. The only problem here is I don't have time to assemble them, and it's almost $300 to buy them already assembled.
Also, I need to figure out how to address the invitations in such a way that it's clear no children are invited. It's not that I don't like children, but I am planning a very adult reception that would not be appropriate. Nursing infants are one thing, but children under 18 are not. But I don't know how to politely word the invitation that way. Sigh...more googling.
But as far as the rest of it, it's pretty simple. We'll be remarried at Hill Top Inn in Elmira on July 25th. The wedding itself will be outside, and the reception immediately following. We have the photogrpaher, videographer, and DJ all booked and ready to go. The colors are black and red, the cake is cheesecake and brownies arranged artistically by the Hill Top staff. I do no decorating, arranging, styling, or other trivial reception things that I don't have time for. Our wedding is crammed between two very busy weeks in Schuyler County, weeks that are going to bring me a lot of overtime, but leave me little wedding planning time.
My mom is going to sing a song, Sharon and Julia will do readings. There is no unity candle, as I hate the symbolism. I love Rob and love being married to him, but we lead seperate lives. Also, my mother and my father will walk me down the aisle, and the usual "Who gives this bride away?" question will be eliminated. No one is giving me away. I chose to marry Robbie of my own free will, and I had the blessing of my parents, my siblings, my boss, and all of Schuyler County emergency services.
Other than that, I can guarantee you I will never marry again. This wedding business is too hard.