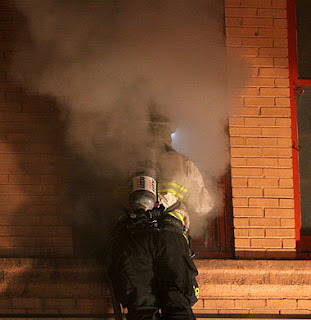 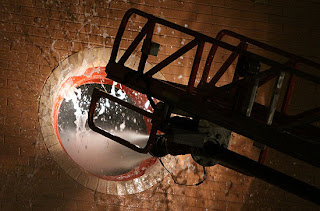 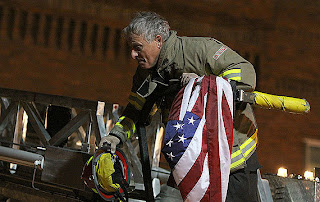 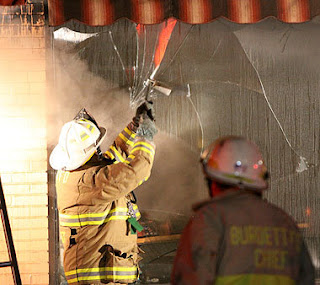 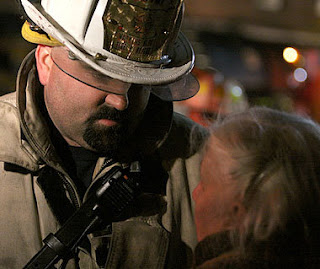 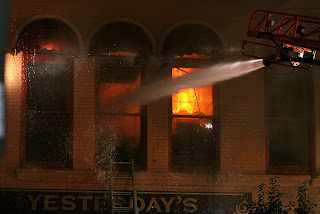 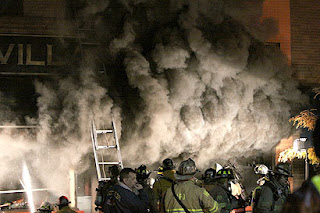 The best part? When you get on scene after flying twenty miles, and walk up to someone and ask if anyone has seen your husband, and the reply is, "Yeah, he's inside." And at that moment, over the radio, command starts yelling for everyone out, because it's about to flashover.
Yeah. Wonderful moment in the life of a firefighter's wife.
(A year from now, as long as I don't get pregnant again, I will be interior again. And then he can follow ME in) 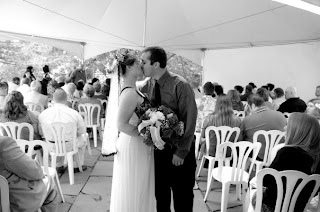 Besides the general pregnancy aching/nausea/insomnia, I have also developed a nasty head cold that I can't take anything for, because I am allergic to Tylenol, and all cold medicines approved for pregnant women include Tylenol.
And then three days ago I lost my anti-nausea pills and spent the next 72 hours hovering over the toilet and lying in bed. Fortunately, we got a rare mid-October snow storm here in upstate New York. I don't believe that there is a God-Who-Changes-Weather-Patterns-for-Me, but if there was, it could not have come at a better time. It snowed, I went to work up at the racetrack, and they cancelled the whole day since they couldn't put cars on a snowy track.
I told my husband this was the best thing that has ever happened to me, except for him, of course. I went home, took a bath, put my pajamas on, and went to bed for the rest of the day.
And then when I woke up(after my husband had gone on 2 EMS calls), it was late, and I was craving melons in the worst way, so my wonderful, dear, sweet husband went out in the cold and the night, bought me watermelon, cantalope, and honeydew. He then came home and cut them all up into biteable chunks for me to eat some and take some to work today.
Clearly, my husband is awesome.

He worked up at South Seneca Ambulance today(8am-midnight), and I was back at the track, so he got up, put my lunch together(just the melons), and we went to work. I have still been feeling like crap, and was hoping today was cancelled--no luck there. So I felt worse and worse all day, until finally we were done, I came home--and discovered the cat had thrown up or had diarrhea ALL OVER MY HOUSE.

Pre-pregnancy self would have yelled at the cat, grumbled about it and cleaned it up.
Pregnant self texted husband twice, called him once, and left him a message yelling that he shouldn't go on calls when I need to talk to him, (Irrational, yes, but that's the way I was feeling) since pretty much the only reason he won't answer my calls is he's either at a fire or with a patient.
And then I cleaned it up.

I think it's just the combination of being sick and pregnant and just plainly being worn down, but it's starting to feel like Rob is never home when I need him. He's home enough when I don't need him, but when everything is falling apart, he's at work. And, yes, he does work three jobs, and fire/EMS is not an especially family-friendly career.
And my suspicion is that if I asked, he would go do a 9-5 job somewhere--and hate it. And why would I want that? I was the one who pushed him to paramedic class, knowing full well the cost, since I was already a medic by then. I was the one who wrote the line in our wedding vows...
I promise to love you when love is easy, and when love is hard. When I need you, but you need to leave because someone else needs your help even more.

I knew, a hundred times over, what I was doing when I married a firefighter-paramedic.
And I love him so much, no matter how sick I get, no matter what I have to clean up when I get home from work. I see the sacrifices he makes for me(even, maybe picking up a few hours of my work shift tomorrow because I'm so sick, but don't want to call in), and I see how he treats his patients. We worked together on the ambulance long before we married, and I think that's what made me fall in love him--Rob's gentle, caring, compassionate ways towards his patients(the drunks at 2 am, maybe not so much).

So he'll be home tonight, and we have THREE DAYS OFF next week together...and we found my anti-nausea medicine. So now I'm going to take a warm bath, and put my pajamas on, and go to bed early.
He'll be home soon.

All will be well

So we are buying a house. At least, we put an offer in, but as there are no other offers, and we actually offered just below the selling price, and it's a short sale, we'll probably be home owners in a few months.
It's a nice house, small and needs some work. 2 bedrooms, with a bonus room with low ceilings that we will quickly turn into a bedroom; 1 full bath and 1 half bath, which will also quickly be changed, and a large, new kitchen. It has a den, living room and dining room, as well as a large yard and wrap around deck. I have plans for that wrap around deck--it involves a hot tub. Upstairs there is a porch off of the master bedroom, as well as a small porch downstairs in the front of the house. It's in a better school district, which makes me feel better about the prospects of kindergarten in a few years.

It's not super big, but it's just right for us right now, and with a quick bit of work, could last us many years if we wanted--or we'll be able to sell it at a good profit a few years down the road.
It's a good thing.

We saw the baby's heartbeat the other day. This drops my miscarriage chance to 4% now that the baby has a detectable heartbeat on ultrasound. It is so strange to think of another person growing inside me; I haven't quite wrapped my head around it yet. The baby just looks like a little string bean on the ultrasound, it will be several more weeks before it starts to look like a baby. And I know it's not even a fetus yet, really, and has no real shape to it, and just kind of resembles a blob--but it's going to be my baby.

So that's life right now; Rob's off to work tonight for a 24, then I'm into work for pretty much a 72 with a few hour breaks here and there on Friday. And school is becoming more and more difficult to keep up with, between house buying and work and nausea and doctor's appointments and sheer exhaustion. Fortunately next semester I will only be taking one class--if I had known I was going to be pregnant this semester, I wouldn't be taking three right now as it is.

But all will be well.

Unsurprisingly, pregnancy apparently does not come easily to me. I should have guessed, being that I needed fertility treatments to even get the process started. But even before I knew I was pregnant, I was gripped with nightly waves of nausea, which has now progressed to almost-constant sickness, weight loss, dehydration and needing to spend hours in the ER hooked up to IVs pumping fluids in.
And my progesterone continued to drop, so I am now on progesterone supplements. I have now missed a day and a half of work, and am still dragging.
I had this week off from school, but I start back on Tuesday. I have no idea how I'm going to survive.

This has furthered my desire to only have one child. I cannot imagine going through this if I had other children to take care of, and a husband who works such long hours(fortunately, though, we are both paramedics at the same agency, so he has been able to fill in for me on the days I couldn't work).

So for now my house is a mess, at least until I can scrape together some time and energy to clean it. I work 7am to 11pm tomorrow, and will spend most of Monday sleeping...then Tuesday is school--maybe Wednesday I can actually get things done?