A day in the life of Josh 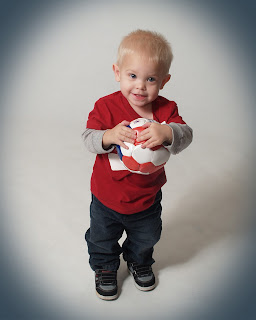 Once upon a time, there was a little boy.
His name was Josh.
Josh had more energy than six little boys all put together, and he loved to play in the toilet, climb in the dishwasher, and ride on the kitty--all when his Mommy wasn't looking, of course.  Josh made his Mommy very tired.
Josh had the blondest hair you've ever seen, and dark, dark blue eyes.  He was very beautiful, even if his Daddy says that boys are handsome, not beautiful.
His Mommy knew the truth--that her little boy was beautiful. 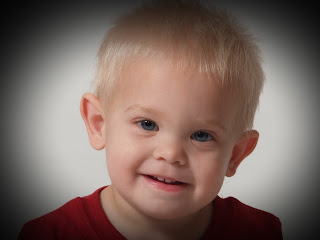 Josh loved his Mommy, and his Daddy, and his Poppies and his Mimis, and he always wanted to go see his Mimis, because they read him stories and gave him cookies and didn't tell him "no" all the time like his Mommy did. 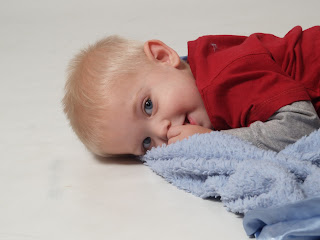 Josh also
loved his blankie.  Sometimes he would even put his
thumb in his mouth and hold onto his blankie and pretend to sleep.  Once he convinced his Mommy he was asleep and that she could sleep, too, Josh would wake up and go on the greatest adventures with the kitty.  Mostly they went out to the kitchen and checked out the fridge, and Josh would try to get a drink of milk. Mostly it ended up on his clothes.  Then they would climb into the shower and try to turn the water on to clean up, but that never worked really well, either.  If Mommy hadn't discovered him by then, Josh and the kitty would go into the bathroom where the coolest toy ever--the toilet--lived.  And Josh would find everything he could and try to flush it down the toilet, because that was really, really cool.
And usually by then, Mommy would wake up and find him, and she would sigh and say, "Who told you that you could play in here?"  And Josh would look at the kitty and say, "Kitty did!"
And then Josh would have to get his clothes changed and his hands and face washed, all of which he hated, and then Mommy would clean up the milk in the kitchen and give him a drink.
The End.

He is the sweetest, cutest little boy ever! What a joy he must be for you and Rob!

Nice post! thanks for sharing... Blessings and happy holidays...shalom soraya